Subscribe to our Daily Dispatch (above) and you’ll always know what our Top Secret coupon code of the day is. Every day we issue a new members-only code that entitles you to have Ground Shipping included on orders of six or more and, sometimes, an added discount!

Objective: Secure an excellent Italian Cabernet Sauvignon for our operatives

Today’s delicious selection from oenologist Andrea Boarette is 60% Merlot, 33% Cabernet Sauvignon and Carmenere and 7% Raboso that was aged for 18 month in classic barriques.

Look – Dark ruby red with garnet reflections that shine through this wine’s clear heart. Slightly more pale ruby along the edges and when
swirled, medium thick legs of varying speeds cling to the side of the glass and show hints of color.

Feel – Initially smooth and expansive with this full bodied wine’s finely grained tannins hitting at mid palate. Lively acidity and a touch of minerality frame the ripe and tangy fruit and linger long into the finish.

Taste – Sweet and ripe red and black fruit including tangy and ripe dark cherry, plum and blackberry along with the smokey and toasted oak and wood notes from the nose lead the way and warm as they glide over the palate and are followed by notes of spice and white pepper, green herbs, soft forest and earth, along with hints of mocha.

Finish – Extremely long, clean and warm on the finish with the ripe and tangy sweet fruit, wood, spice fading in perfect as subtle notes of texture remain and dry the palate inviting another sip.

Conclusion – The 2007 La Montecchia Villa Capodilista Colli Euganei D.O.C. is delicious and unique Merlot lead blend that captures the warm and rustic richness of the region’s unique terroir. Ripe and sweet aromas and flavors of red fruit framed by toasted and smokey oak, a supporting cast of the complex aromas and flavors and a sturdy but peasant mouthfeel with lively acidity makes this a great food wine. Enjoy this wine tonight or cellar for three to five years.

The approximate location of the Colli Euganei DOC can be seen in this satellite photo. 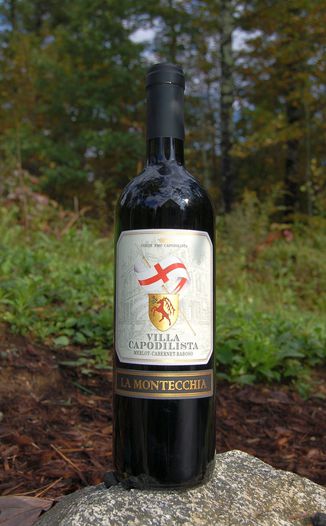 Villa Capodilista is the heart of La Montecchia; a vineyard steeped in tradition, it gives its name to both the surrounding area and the business. The cru sits on a hillside facing south, and the area’s trachyte rock and volcanic origins afford the wine its unique flavor. It is characterized by a full, ruby red color and a strong, lingering aroma with a hint of spices and red fruit. On the palate it is complex and refined, warm and full-bodied. This wine is an excellent complement to roasts and braised meat, game and mature cheese.

Prize‐winning wines of the highest quality from a wine estate with over a thousand years of family
history. The historical wine estate La Montecchia lies in the heart of the Veneto region, and is
primarily concerned with viticulture, an activity established there since before the Middle Ages. The
owner, Count Umberto Emo Capodilista, and his son, Giordano, produce wines of international
standard from the varieties Merlot and Cabernet as well as from local grapes with the wish to
constantly improve the area’s potential.

The Capodilista family came to the Euganean Hills after the time of Karl the Great and received the
earldom of Montemerlo for the bravery they demonstrated in the battle against Desiderio, the last
king of the Lombardi. At the end of the 18th century, Beatrice, the last member of the Capodilista
family, married Leonardo Emo, a Venetian noble from one of the oldest family within the “Most
Serene Republic of Venice”.

The La Montecchia estate is primarily concerned with viticulture, an activity established here since the Middle Ages. Petrarch himself appreciated the local vintage, making his home at Arquà at the southern foot of the Euganean Hills.

The present owner, count Umberto Emo Capodilista, started renovating the vineyards and the cellars at the beginning of the ‘90ies, making his son Giordano Emo Capodilista responsible for the managment of the estate, assisted by the oeunologist Andrea Boaretti and the agronomist Patrizio Gasparinetti.

Prizes and recognition from the most notable wine critics like Robert Parker, Luca Maroni, “Gambero Rosso” and Luigi Veronelli have encouraged Giordano Emo to continue in this manner. Half of production is exported abroad.

Most of the labels show figures from the highly interesting “Capodilista Codex”, a volume commissioned in the 15th century to an unknown artist by Giovan Francesco Capodilista, ambassador of the Serenissima to the council in Basel.

Black grapes predominate on these 45 hectares:Cabernet Franc, Cabernet Sauvignon, Carmenere, Merlot and Raboso – a local variety that is picked late – are cultivated here. Merlot and Cabernet have been grown in La Montecchia since the 19th century and are justifiably regarded as local vines. The white varieties are Chardonnay, Moscato Fior d’Arancio and Pinot Bianco.

All varieties – except the basic “Colli Euganei Rosso” wine of the estate called “Cadeto” which is made with Merlot and Cabernet and the cru “Villa Capodilista” which is made with Merlot, Cabernet and Raboso – are bottled as single variety (“vinificati in purezza”). You might also want to try the Moscato Fior d’Arancio made with the Moscato grape which is put to dry before it is pressed and produces an highly acclaimed dessert wine sold in half-size bottles. 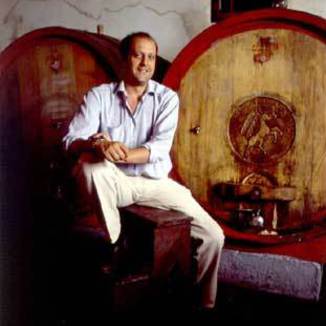 As your agent, we can assist in selecting a common carrier for the shipment of wine that you have purchased and own. The majority of states maintain laws and regulations that control or restrict the importation of alcohol. In all cases, the purchaser is responsible for complying with the laws and regulations, including in particular those relating to the import of alcohol, in effect in the state to which the purchaser is shipping alcohol.